How to create more than one certificates and apply them correctly the sites?

Without sufficient detail, one can only guess…

I would guess that the IIS bindings are incorrect.
Each site should have its’ own cert with corresponding binding.
Note: If multiple names will use the same site, you will need to get creative; as entering any hostname would cause problems with the other hostnames trying to access that same site: 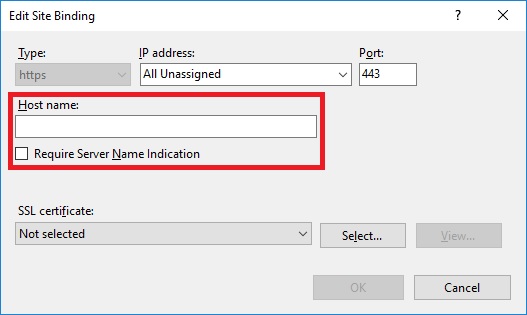 You are correct, SNI was introduced to IIS with version 8.0 https://docs.microsoft.com/en-us/iis/get-started/whats-new-in-iis-8/iis-80-server-name-indication-sni-ssl-scalability

You could try updating IIS version.
Not sure if that’s even possible without O/S upgrade, I can only find IIS 8.0 EXPRESS (not recommended)

OR (this is not a pretty solution)
You could introduce a reverse proxy on that same system; allowing you to run the individual sites on individualized IP:port combinations. (AKA FAKE SNI)

So you’re telling me no way on IIS7.0 ? I think should be a solution without reverse proxy, otherwise no IIS version would have ever worked before 8.0.

And your conclusion is… ?

Or throw in a reverse proxy…

Before SNI people really had to deal with a lot of complicated workarounds, including getting extra IP addresses, or getting very large SAN certs so that clients would find the name they were looking for somewhere in the certificate. The lack of the SNI mechanism was definitely a big factor obstructing deployment of HTTPS.

You are hitting one of the issues/limitations of the Letsencrypt Win Simple client. The ACME Sharp PS module should work for you in this case.