Hi, please support McPherran Siteware web server for certificate activations. If you contact at email given, I will work with provide whatever is needed for this.

Hi @C0der, are you the developer of this web server?

Let's Encrypt uses a protocol called ACME to handle certificate requests and issuance. In order to get certificates from your web server, you'll need to speak ACME to the Let's Encrypt API endpoint.

The ACME protocol was standardized by the IETF. In addition to the original ACMEv1, Let's Encrypt newly supports ACMEv2, which is the only version of ACME with which Let's Encrypt will issue wildcard certificates. You can see more information about this at

Let's Encrypt is a free, automated, and open certificate authority brought to you by the nonprofit Internet Security Research Group (ISRG).

including the "client developer information".

Most integrations use a standalone client (which may be called as a separate process) or client library, but you can also see the Caddy and Apache web servers' integrations which have support directly in the web server application. (The Apache support is mod_md - Apache HTTP Server Version 2.5 and the Caddy support is https://github.com/mholt/caddy/tree/master/caddytls. As both of these implementations are highly specific to their associated web servers, I'm just providing them as examples of how a web server could achieve native support for ACME if the developer chooses to purpose that path.)

Dear schoen, yes I am the owner and main developer. Thanks very much for info. I noticed that some third-party cert tools list servers they support like Apache and IIS. Siteware runs on Windows Servers (and Linux but not at the moment) and so I’m pinging the community to know that IIS is not the only option on Windows Server and my hope is that third parties will add Siteware to their list of servers they generate certs with. I will do my part and look into integrating ACME and return when ready. In the meantime at least third parties may have heard of Siteware. Thanks again.

(By the way, sorry if too promotional. I have integrity and try to be careful about things like that. When I went to create a cert, I saw that some servers are supported de-facto and I couldn’t [easily] generate certs since Siteware not known by Certbot. So I seek to have Siteware supported and this seemed like the place for that and now I know what I need to do on my end. If you wish to keep the message hidden, I fully understand and thanks again for information.)

I saw that some servers are supported de-facto and I couldn’t [easily] generate certs since Siteware not known by Certbot.

If you like Certbot, you could also try writing a Siteware installer plugin for it. Certbot is open source and we accept pull requests! 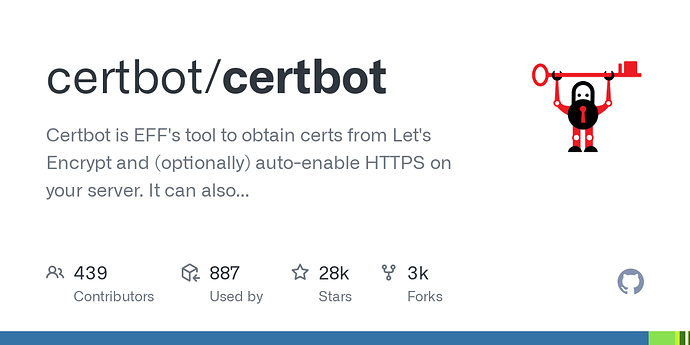 Certbot is EFF's tool to obtain certs from Let's Encrypt and (optionally) auto-enable HTTPS on your server. It can also act as a client for any other CA that uses the ACME protocol. - GitH...

CertifyTheWeb is also probably the most popular Windows GUI ACME client that interfaces with Let’s Encrypt. Writing a plugin for that would be at least as useful as for Certbot itself. Remember that any patches are unlikely to be accepted unless they’re clean, simple, and rely primarily on APIs within the server to support the certificate change process. That would probably be simpler than writing a whole ACME implementation.

OK, thank you both and I’ll update when I have anything implemented.