Maybe an intermediate certificate is missing?

I ran this command:
From gmail attempting to connect with both port 995 and port 993 fails.
openssl s_client -showcerts -connect mail.algsol.com:993 -servername mail.algasol.com

It produced this output:
For gmail:Server returned error: "SSL error: No path found from the leaf certificate to any root. Maybe an intermediate certificate is missing?"

My web server is (include version):
algasol.com

The operating system my web server runs on is (include version):
$ cat /etc/debian_version
bullseye/sid

My hosting provider, if applicable, is:
linode

I can login to a root shell on my machine (yes or no, or I don't know):
yes

I'm using a control panel to manage my site (no, or provide the name and version of the control panel):
virtualmin

Maybe an intermediate certificate is missing?

Not missing, more like very old and not in use any longer, expired to be exact:

How did you install the certificates? I.e., what's the mailservers configuration regarding TLS?

By the way, the above is for your Dovecot IMAP service. Your SMTP server isn't sending the intermediate at all.

Are you referring to the installation of intermediate certificates? I don't recall how the intermediate certificates were installed, unless you are referring to the copying of letsencrypt's "fullchain" file to the respective domains home directories. If the latter, then it was accomplished by the virtualmin script script used in "copytodomains" referred to above. That script is used in the deploy stage of renewal:

Regarding TLS for dovecot:

It doesn't look like that command actually uses the fullchain.pem or chain.pem files, just the certificate in cert.pem.

Regarding TLS for dovecot:

The configuration directive you want to check is ssl_cert. (TLS is the modern name of the older protocol once called SSL.. But many applications still use the old ssl name unfortunately.)

The virtualmin install-cert command apparently copies the fullchain*.pem to ssl.combined under the respective domain home directories:

Then in /etc/dovecot/dovecot.conf we find:

Which, as previously shown, is identical to the ssl.combined file except for a blank line between certs.

Could you please upload /etc/letsencrypt/live/algasol.com/fullchain.pem?

The certificates you've posted are:

The certificates you need are:

I'm wondering if it might be an out-of-date certbot/certbot docker image:

The full chain is provided by Boulder (Let's Encrypt's CA software) to certbot (or whatever ACME client is being used) each time a certificate is generated. The ACME client doesn't/shouldn't keep a database of intermediate certificates. Since you have an R3-signed certificate, your ACME client must have been sent the current chain, which would include R3 and not include Let's Encrypt Authority X3. What you've currently presented is like buying a Honda vehicle then popping the hood to find a Toyota engine. We see this problem commonly with control panel and other site management software that does keep a database of intermediate certificates (that are often not updated). That does not appear to be the case here though. The problem may potentially be due to some custom script work as @swelljoe mentions below.

I surmise that your virtualmin needs its intermediate database updated.

We don't ship an intermediate database. Up to Webmin 1.870 we did have a copy of the LE intermediate cert included (I think due to the minimal ACME_tiny client we used by default, I don't remember details), but that hasn't been the case for some time. I'm not sure how this system is getting the old one...we grab a new one on every renewal, as far as I know, and all modern systems should be using certbot for the cert and chain request, by default.

I want to be clear, I do not understand this issue (the cross-chain signing issue, which is still plaguing our users and lots of others), but I do know we stopped shipping the old intermediate chain in the distant past. It should not be an issue on up-to-date Virtualmin systems.

But, even with certificates generated after the expiration of that DST Root CA X3 cert, I still see it show up as a certification path (even though there is a valid certification path for newer clients), and I don't understand why. This exact same thing happens for certificates generated directly with certbot, without Virtualmin involved, so it is unrelated to Virtualmin (though OP does seem to have something wrong if they're getting the old intermediates, but it's not the case in my Virtualmin deployments, so something is unusual with OPs Virtualmin system or the way certs are being generated/used).

e.g. this is a cert issued after the expiration: 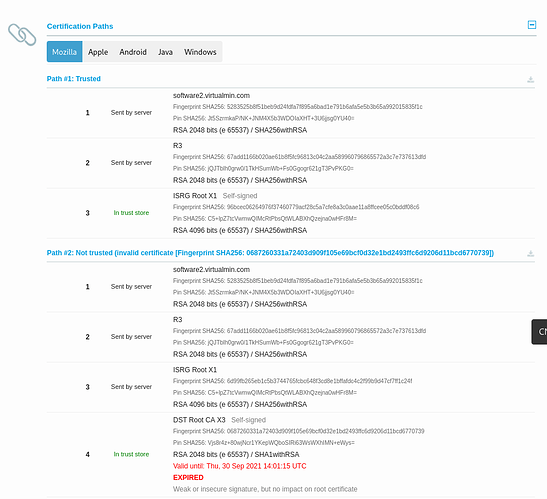 I can reproduce this same broken certification path on a certbot-generated certificate, as well, again with no Virtualmin or Webmin involved. In this case, Virtualmin isn't doing anything unique to cause this problem, and I don't know how to solve it, if certbot also generates a certificate that can fail for some clients.

I tested on an Ubuntu 16.04 system, where I can reliably reproduce the issue, and found that if I simply removed the DST_Root_CA_X3 certificate from the system CA bundle, a valid certification path could be found without it...but if it exists, requests fail.

e.g. this is a cert issued after the expiration:

I can reproduce this same broken certification path on a certbot-generated certificate, as well, again with no Virtualmin or Webmin involved. In this case, Virtualmin isn't doing anything unique to cause this problem, and I don't know how to solve it, if certbot also generates a certificate that can fail for some clients.

That's not a broken chain, that's all correct and intended.

We're aware that there are some libraries (e.g older OpenSSL) that can't do this*, which is why Let's Encrypt offers an alternate chain which does not include the certificate leading up to DST Root CA X3 (instead terminating at ISRG Root X1). This alternate chain can be requested by the ACME client, if Android compatibility is not desired.

*Some libraries, e.g OpenSSL 1.0.2 have a workaround where simply removing DST Root CA X3 from the trust store makes them compatible with the default chain. This is also why some vendors (Ubuntu) have recently started shipping patches which remove DST Root CA X3.

*Some libraries, e.g OpenSSL 1.0.2 have a workaround where simply removing DST Root CA X3 from the trust store makes them compatible with the default chain.

OK, that answers my question/confusion. I assumed I was seeing a representative example of the problem when I was testing on Ubuntu 16.04, but it seems to be somewhat different problem with the same symptoms.

This also confirms that Virtualmin with Webmin in any version after 1.870 is doing the right thing WRT the chain (it's using whatever certbot gives it). So, I don't know why OP has the old intermediate chain...seems to be something in custom scripts.

Thanks for the confirmation of that @swelljoe. This information not only helps whittle down the issue here, but can be recycled in other cases in the future.

I was unclear in my wording. The script is my own and it uses the virtualmin-supplied script virtualmin install-cert.

The reason for this is that I had a requirement for wild card domain names a while ago, which virtualmin's system didn't support. So I had to generate my own certificates. The script was a letsencrypt deploy hook script.

Where do I put the two files so that certbot will grab them:

Trying to figure out where certbot might be grabbing this stuff, I ran bash commands like:
cp /etc/letsencrypt/live/algasol.com/fullchain.pem .
split the two certs into fc1.pem and fc2.pem

did the same for fc1.pem and fc2.pem
for each file I took the 0 length diff full paths and put them into a files named {fc*}paths.log
then I wrote another perl script:

So I'm not sure what all these directories are but, unless as I suspected in my concern about the docker image for certbot I'm using, one of these directories is where I should copy the certificate authority files.

I also, after updating the docker certbot, forced renew and although there are new certs in the right places, even after a restart of the services I'm still getting the intermediate chain error.

The phrase "certbot configured" would direct me to this documentation on certbot which has information on the configuration file (and command line options) but the word "authority" occurs only once and not in reference to a configurable parameter.

Should I start digging into the build spec for the Docker build for certbot?

The certbot parameter of concern here is --preferred-chain.