Indeed, but reflecting on that I have a question. If the Windows didn't get update, just the Chrome, why he won't fail because of the ISRG Root X1, he shows the old DST Root CA X3 instead, in my understanding it should shows that it doesn't recognize the new ISRG Root X1 that was generated after the device update. I'm thinking right?

On the Windows client, in a certificate management console, did you verify that the ISRG Root X1 certificate is present in the "Third Party Root Certification Authorities" directory?

I think I understood, so probably is the case on this Windows 7. He don't have the ISRG Root X1 because he didn't get any updates so it throws back to DST Root CA X3, right?

(Sorry, I misunderstood the question before, I thought you were asking about the server)

Correct.
The reason DST Root CA X3 still exists in the default chain is only for older Android devices that don't care about the expiration date of the root certificate, however, for other operating systems, it must have the ISRG Root X1 certificate locally.
You can try downloading the "ISRG Root X1" certificate in Chain of Trust - Let's Encrypt and put it in the "Third Party Root Certification Authorities" directory of Windows 7 to verify that this resolves the issue.

Ok, I will try that tomorrow, our client turn it off already. But probably will fix it. I had hope to find another solution. But thanks for your help so far.

For anyone having issues with Google Chrome on Windows 7, this is the fix for me too. I just downloaded the .der file from there, and put it on "Third Party Root Certification Authorities" (o "Entidades de certificación raíz de confianza", en español).
Do that, restart the browser, and that's it.

Prior of that, I deleted the X3 certificates from the intermediate window, don't know if that's something required to do or not.

Hey could you please tell me which der file and how you installed it in Windows?

Thanks but which one do i I use? There are multiple files there.

I don't really know which one he used.

Thanks but which one do i I use?

You'll probably want this one

Beautiful, just what I needed. Thanks

The proposed solution worked for me on wind 10 with Chrome

3 Likes
NET::ERR_CERT_DATE_INVALID, How to update the LE root cert on Windows Pc that does not have direct internet?
Help thread for DST Root CA X3 expiration (September 2021)
All SSL cert are saying root R3 cert has expired
jarffffff October 1, 2021, 12:03am #18

The above worked for me as well - one tip is to make sure you double click the .der file to install it. Do not try to Import using certmgr.msc or Google Chrome.

Hi @Emanuuz
I'm having the same issues " Your connection is not private" on certain websites with my Chrome on Windows 7. Spent all night tying to fix it. I have downloaded the isrgrootx1.der file but what does "put it on "Third Party Root Certification Authorities"" mean and how do I do this? Thank you for your time!

Double-click the file and then click the [install] button.
Choose where to install it to and pick "Third Party Root ..."
[not my advice - simple typing for clarification]

Thanks @rg305. I found the "Third Party Root Certification Authorities" folder and installed it again. Unfortunately, it hasn't solved the problem. Thanks once again for your help though 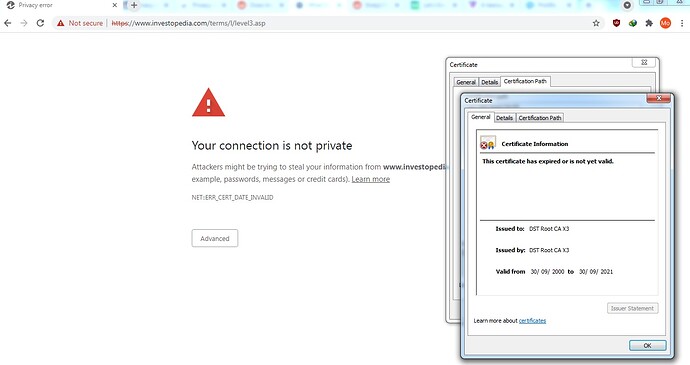