This has been answered to some varying degrees in some specific questions around the forum where people confuse Google Domains DNS with the Google Cloud DNS, but I figured I’d ask more generally and to the point.

Does anyone know of any kind of API or program for domains registered with “domains.google.com” to do the DNS queries that would be reqired soon for the wildcard certificates under ACMEv2?

I’m aware that you can manually enter the DNS challenges as TXT records, but I believe that you need to update those whenever your certificate expires, meaning that I would have to go in rather often and change the challenge strings. I’d also like to avoid setting up my own DNS server to handle these requests.

As far as I know, Google Domains doesn’t have an API that lets you change TXT records. The home page says:

So it has a simple dynamic DNS API that lets you edit A and probably AAAA records.

But I’ve seen no evidence that there’s a more general API.

But I don’t use Google Domains myself.

(Google Cloud DNS, of course, has a great API.)

It’s actually well featured, so far as having available records.

Here’s the relevant control panel… There are others but I see less and less relevant information.

I don’t think most of those are useful options besides the manual records unless I set up a DNS server of my own. 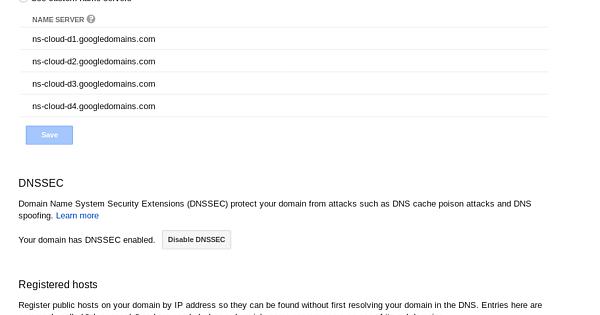 This also exists, but is probably not of more help:

It does not appear to allow changng anything other than a single A record for Dynamic DNS, unfortunately.

Hmm, Google has a 24/7 support line for my account. I’ll ask them if there’s an API.

So I got a reply back:

Thank you for contacting Google Domains.

I’m afraid that Google Domains does not yet support API that allows you to automate or modify existing dns records on the domain’s settings. However, if you’re referring on adding TXT records from ACME v2, you may follow the steps below:

Please note that for DNS changes to take effect, it may take a propagation period of several minutes or up to 24-48 hours across the entire internet.

For further questions, feel free to reply to this email or visit the Google Domains contact us page.

I suppose that completely nerfs the possibility of having wildcard certs without manually entering the TXT records. I’m switching away from Google Domains, and I would recommend anyone else who wants automated DNS challenges or wildcard certificates to do the same.

That said, one can set up their own DNS server and then use that to do the challenges, but it’s something that I believe the DNS provider should handle with an API, honestly. Much less work for the end user.

This is most disappointing. I switched to Google Domains due to perceived confidence and trust in the Google brand and platform. I will move my domains elsewhere, where I can depend on a full feature set of API backed asset configuration tools.

This is most disappointing. I switched to Google Domains due to perceived confidence and trust in the Google brand and platform. I will move my domains elsewhere, where I can depend on a full feature set of API backed asset configuration tools.

You could use Google Domains plus Google Cloud DNS. It would be a different pricing model, but it has a good API.

...which is what acme-dns is designed for.

That said, one can set up their own DNS server and then use that to do the challenges, but it’s something that I believe the DNS provider should handle with an API, honestly. Much less work for the end user.

It's actually not good for the end user, because these APIs rarely have safe permissions and ACLs. Most DNS APIs will allow the token to update A/MX records; many will even allow the token to transfer the domain away. This makes automatic renewal incredibly unsafe, as a compromised server would expose the plaintext token.

The best option in almost every case is to:

That’s actually how I ended up doing it - I set up a delegated nameserver running bind9 and just did a cname.

Still, for the basic user, any kind of API would be nice. It’s not the most simple thing to set up your own DNS server for some users. I would even go so far as to say that a limited API that just integrates with LetsEncrypt and doesn’t let you do anything else would be good enough for the purpose, and not changing every kind of record that exists (so limit API access to just the acme_challenge TXT record).

It’s also worth mentioning that some ISP’s prohibit running your own DNS server. Not as many as it used to be, but still. Some ISP’s are afraid of dumb users with amplification attacks.

...which, again, is exactly what acme-dns is designed for. And it's pretty simple to set up.

After finding this out myself while looking at setting up wildcard certs, i moved my actual DNS records over to Cloudflare. Still using google domains as the actual registrar though