Acme-dns not reachable, possible DNS problems, "couldn't get address for"

It produced this output:

The operating system my web server runs on is (include version): Ubuntu 20.04.2 LTS

I can login to a root shell on my machine (yes or no, or I don't know): yes

I'm using a control panel to manage my site (no, or provide the name and version of the control panel): (irrelevant?) the final outcome is managing nginx-proxy-manager on my local network

The version of my client is (e.g. output of certbot --version or certbot-auto --version if you're using Certbot): -

Basically I can reach the local acme-dns stuff by running dig @0.0.0.0 auth.coust.cloud and get the answer:

My primary use of the domain is for Mail-in-a-box instance where I set up custom DNS records. I tried to reverting back to porkbun default nameservers and adding records on their web page but the outcome is the same. I checked two machines, one on Google Cloud and one on Oracle Cloud. Firewall allows 53, 80 and 443 ports. Security lists/firewalls on the cloud providers are changed to allow communication on mentioned ports too.

I'm at loss and maybe some of you can quickly catch the mistake or point me in a good directions.

What I'm trying to achieve is running nginx-proxy-manager with added wildcard *.coust.cloud certificate for all my subdomains and auto renewal and I need acme-dns for that. I would like to use my domain name to access local stuff so I added the record to direct main page to 192.168.137.2. I also had wildcard record pointing to the same address before I tried setting up DNS records directly on porkbun site (that I will add back later on after finding the cause of issue). I'm trying to have https to my local nginx-proxy-manager with the rest of apps in docker containers and common network without exposing any ports except 443 - all trafic will be going thru nginx and each app will have their own subdomain.

This is the "glue" send by the "porkbun.com" nameservers. But that IP address is not reachable. And it differs from the IP address you're showing below.

Yes, this is my current IP address of Google Cloud Compute Instance.

The second code block with 130.61.122.175 IP was my previous Oracle Cloud Instance and I copy pasted results from the wrong putty window. dig @0.0.0.0 auth.coust.cloud on my Google Cloud instance (the one I'm testing with currently) returns correct results:

I can also reach and ping the server just fine:

The compute instance has mail-server tag which allows following ports: 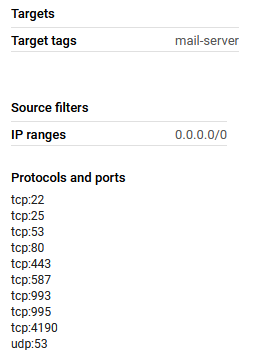 If that IP is not reachable then there might be some sort of firewall conflict/issue? I installed firewalld (ufw doesn't work on Oracle Cloud) and allowed ports 53, 80 and 443 with following commands:

After reinstalling firewall and setting up rules again I can open the website on http://35.211.229.210/ and not get timeout so I think firewall was blocking the access... I will need to investigate further what exactly is going on with the firewall but you certainly pushed me in the right direction.

I can see some progress, but your DNS server isn't functioning/isn't available properly yet.

It now says "connection refused" in stead of a timeout. So probably not a firewall issue (could be tho), but more likely the DNS software isn't running.

This is the output from the systemctl status acme-dns

Restarting service and running journalctl -u acme-dns outputs that the server is correctly listening on 53 and 80 ports.

It seems there might be some misconfiguration in the firewall after all?

I'm not sure if that's intended or not

This is what is present in the default config and there are no mentions anywhere to edit this out. I think it simply means "start locally on port X" but when you can reach it over network it will still reply if the port is correct.

I changed it to the public IP but it results in fatal error during start up of the service:

127.0.0.1 successfully starts and I assume it is what it should be. The problem is why port 80 is reachable and returns stuff but 53 timeouts...

I tried playing a bit with firewalls etc but can't really make the dig to resolve auth.coust.cloud or any other online dns checkers.

What's already listening on UDP port 53 if it's not acme-dns?

It seems the default ubuntu services or something similar is for some reason listening on port 53 and possibly conflicting?

EDIT: Getting rid of local name resolver and changing acme-dns config ip from 127.0.0.1 to 0.0.0.0 and restarting fixes the connectivity issues. Now I can't resolve any names on the server itself so visiting pages is a no-no but I can make the server, well, serve as DNS. Need to dig deeper how to make both work at the same time.

I'm not familiar with systemd, systemd-resolve nor Ubuntu, so I can't help you with that I'm afraid.

This is fine, you have already put me in the right direction! Thank you for the help.

For anyone stumbling upon this thread in future:

To get acme-dns working correctly on Ubuntu you have to make sure all ports are open and get rid of default and local name resolver listening on port 53 and conflicting with acme-dns. You can check if something is running on port 53 by running lsof -i :53

For debugging issues if something still doesn't work for some reason I recommend journalctl -u acme-dns, systemctl status acme-dns and dig domain +trace +additional commands.

systemd-resolved (on Ubuntu, at least) only listens on 127.0.0.53 (a specific loopback address) by default:

That does conflict with anything trying to listen on 0.0.0.0 (all interfaces), but if you specifically set acme-dns to listen on just your host's external IP address - anything other than 0.0.0.0 or 127.0.0.53 - that should work, without needing to disable systemd-resolved. I just tested this successfully on a fresh Ubuntu 20.04.2 LTS VM.

@CoUsT, is it possible you were trying to run acme-dns as a non-root user, but without the CAP_NET_BIND_SERVICE capability that lets non-root processes bind to low port numbers; or maybe using some kind of containerization that abstracts the external IP you want to listen on, so that the acme-dns process can't find its interface?

I believe that was already tried:

I changed it to the public IP but it results in fatal error during start up of the service:

However, perhaps the host is behind NAT and the public IP address shouldn't be used? Instead, perhaps the internal private IP has to be used.

is it possible you were trying to run acme-dns as a non- root user, but without the CAP_NET_BIND_SERVICE capability that lets non- root processes bind to low port numbers

I executed all my commands as root user. I also used the service file and instructions from the readme of acme-dns repo so that it starts automatically on boot.

or maybe using some kind of containerization that abstracts the external IP you want to listen on, so that the acme-dns process can't find its interface?

All was done on a fresh installation of Ubuntu 20.04 LTS tested on both Google Cloud and Oracle Cloud instances.

I tried again just to be sure and this is the outcome:

However, perhaps the host is behind NAT and the public IP address shouldn't be used? Instead, perhaps the internal private IP has to be used.

So I assume I should put 10.0.0.230:53 in the config but that was not explained anywhere in the readme or other places making it confusing to get started with acme-dns.